Renaissance believes that a warm welcome is all one needs to feel at home. Going by this notion, we at Renaissance make sure that our new batch of students, are welcomed and recognized through a grand Fresher’s Party. This party gives the platform to the students to get along with not only their batch mates but also with their seniors and teachers. They are selected and invited on the stage to showcase their talent, so that they are appreciated and rewarded.

This year the fresher’s party, ‘Scintilla 2020’, saw its freshers draped in red colour, which further glorified the evening. The students put their best foot forward to earn various titles and awards. We even had an in house band which further added up to the vibe of the evening.

Reflection of institute’s ideology of pursuing creativity and passion, Indradhanush is the central India’s biggest management fest of Renaissance Indira group of institutions, where one finds the real VIBGYOR spread over the campus.

This annual event gives a platform to each and every student, no matter what their skill or talent is. Students participate in this competition stream wise and hence learn the values of team work and giving their best shot for their team. We call it a management fest because it involves all the aspects of management i.e. planning, Organising, Staffing etc. The event is marked by presence of celebrities who further brighten up the spirits of the students.

This year’s Indradhanush was marked by the presence of celebrities such as Aparshakti Khurana and Kriti Kharbanda and the winning team was awarded a cash prize of Rs 1,00,000/-. Such is the grandeur of this event.

We have so far shared about our faith in the character building through parallel education and allied facets. The annual function of our college is also a reflection of our philosophy.

We try using all interaction points with students as nodes to instill values in them. Because we want that, wherever they go after us, the mien of Renaissance should be well read in their actions and deeds.

Our annual function is also one such node. Annual function at Renaissance is not just a group dance event. It is an event wherein, all the four houses of our college namely Bentham, Kelson, Hart and Austin prepare one dance drama each. These dance drama are based on one or the other theme. These themes not only add thoughtfulness, but also motivate the students to research the topic and hence adds value in the process.

Over the period of years, students have got to experience and learn about different themes. These themes included Indian Mythology, Colors- Red, Black, White, Pink, Values – Inspiration, Compassion, Wisdom, Courage, 8 emotions of life etc. The messages from each theme flow in the air, and when portrayed on the stage, mesmerize everyone. The dance performances thereby are not just heart touching and leave an imprint on the minds of its audiences.

Annual Function 2020, was called Orphic, and was themed on ancient mythologies of the world. The houses were allotted one country each i.e. India, China, Egypt and Greece. The performances were based on mythologies of these countries. The performances were not only colourful but also enriching in terms of the stories from each country. The grandness of the event was mesmerizing and by the end of it, the students became more aware about such long forgotten mythological stories.

The graduation of the students is a landmark in their careers as it marks the end of a journey along with the beginning of new one. As we let go of our little butterflies out into the world, we stop and take a moment to make them realise how special their journey with us has been.

Convocation day is celebrated every year at Renaissance, wherein the final year students in the presence of their parents bid adieu to the institute. The event is marked by students dressed in formals and wearing the graduation hats and college scarfs on top of that. These scarfs are a token of remembrance for the students, so that whenever they look back at their journey, they are left with a comforting smile. 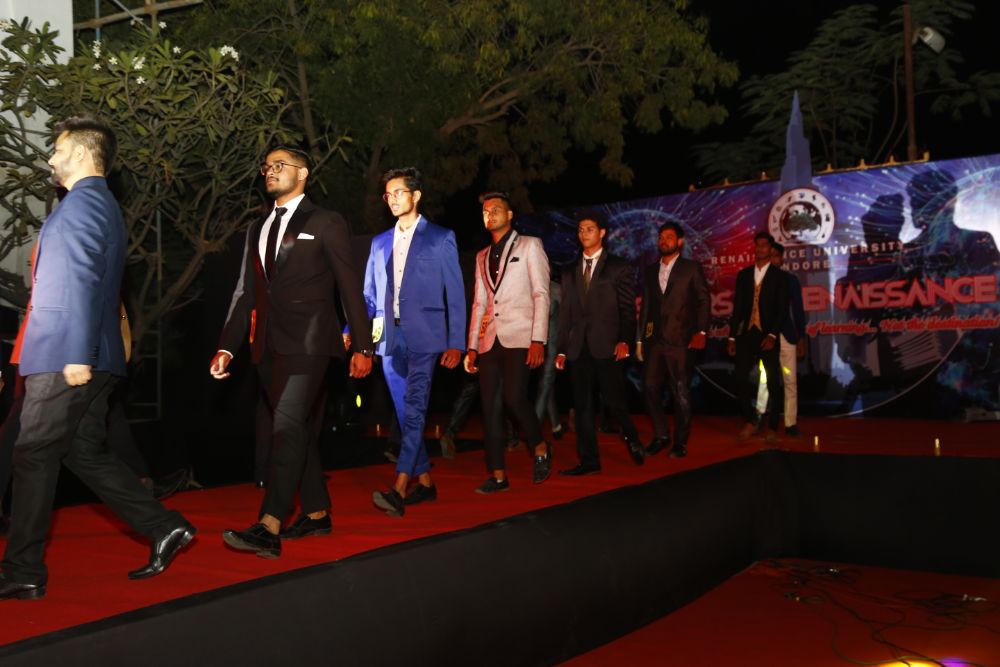 Each student is unique and special. One might be good in academics, or might be good at time management or might be a great social worker, but each one of them holds a special place in the theatrics of this universe. Convinced with this thought, the institute organises an annual multi-level event named Ambassadors of Renaissance. In this event, lasting up to 10 days, the students are taught various life lessons, social lessons as well as work lessons. Present day insights are discussed with the students through sessions taken by the guest trainers, who are stalwarts in their own fields. Special sessions are taken by our very own, Swapnil Sir, which are enriching as well as lucrative for the students. During these sessions, an array of activities and tasks are assigned to the students. The performance in these time adhering activities determines the further selection of the students for the next level. Handful of students are selected for the final day of the event, wherein another few rounds give us the Ambassadors of Renaissance, who are the real representatives of the institute. The students securing first position are awarded with an all-expense paid, Dubai trip, while the students securing second position are awarded with a Mumbai Trip.

A night of Dancing for all, where students show their Garba moves with sway, an ethnic night with music, food and unlimited fun. College celebrates the epitome of Shakti through Music.
Previous
Next
Copyright © – 2022 Design and Developed by Graffers ID
×

WhatsApp Chat is free, download and try it now here!